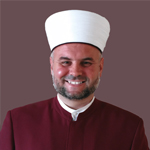 Born in Sarajevo, the capital city of Bosnia and Herzegovina, July 20th, 1973. Only child of his parents, Sahze and Ahma. Prior to the war in Bosnia and Herzegovina he visited the Gazi Husrev-beg madrasa to become Imam, Khatib and Mualim. He finished and graduated madrasa in 1992. When the war began, Abdulah ef. Polovina found himself to be in Dobrinja, a small locality close to the airport in Sarajevo.

In Dobrinja he volunteered for territorial defense of Dobrinja. He has been wounded three times during the war. When the war was almost finished, he got married to his wife Hatidza.

During his work as Imam in Seattle he performed the holy obligation of Hajj. Today, Abdulah ef. is the Imam of the Bosniak jamaat and organization in Portland, in the american state of Oregon.

He is the father of five children, Muhamed, Lamija, Ahmed, Mustafa and Abdulgafar. Moreover, Abdulah ef. has graduated the Islamic Studies at Cloverdale College in Indiana, after that he graduated Comparative Religions at the George Washington University in Seattle. In March 2015, he got his master degree at the Seattle University at the department for Theology and Ministry and is now Master of Science in transformational leadership.