“ALLAH IS CALLING INTO THE HOUSE OF PEACE AND SHOWS THE RIGHT PATH TO WHOM HE WANTS TO. THOSE WHO DO GOOD DEEDS AWAIT A REWARD, AND MORE THAN THAT! THEIR FACES WON’T BE COVERED BY DARK AND REGRETS; THEY SHALL LIVE IN PARADISE, WHERE THEY WILL STAY FOREVER. AND THOSE WHO DO BAD DEEDS AWAITS A PUNISHMENT EQUAL TO WHAT THEY HAVE DONE; THEY WILL BE COVERED BY DEPRESSION, NOBODY WILL PROTECT THEM FROM ALLAH, THEIR FACES WILL BE DARK AS IF PARTS OF THE DARKEST NIGHTS HAVE FALLEN DOWN ON THEM; POPULATION OF FIRE THEY SHALL BE, AND THEY WILL FOREVER LIVE THERE!” (JUNUS: 25, 26, I 27) 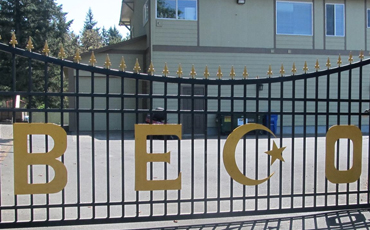 The introduction of the IBECO (former BECO) jamaat and organization we shall start with consultation that the first jamaat in Mecca has been established by Allah’s Prophet Muhammad alejhi ve sellem, which acted behind the scenes and often far away from the public’s eye. The second jamaat was established in Medina and it represents the ancestor of all later jamaats to be established. If we compare it in terms of structure, organization, hierarchy and activities we will find many similarities to our jamaats, but also differencies which are conditioned by the unique Prophet’s charismatic personality. At the time of the Prophet Muhammad alejhi ve sellem, there were no boards of the jamaat as we know them today. Today’s jamaats have the imam who represents the successor of Allah’s Prophet, a jamaat to be compared to the ashabs who provided the necessary conditions for the jamaat to be able to function(construction of the mosque, furnishing, maintaining, renovation, and other) and the head of it is lead by the Board of the jamaat.

IBECO jamaat and organization is headquartered in Portland, in the state of Oregon, close to the mouths of the rivers Willamette and Columbia. The IBECO jamaat with its activities and memebership covers also the city of Vancouver located in the state of Washington which is divided from Portland by the bridge on the Columbia river. According to the last citizen data from 2014, there are around 619.500 citizens in Portland, making Portland the biggest city in Oregon, and third with regard to settlement in the Pacific Northwest. There are 300 to 400 or close to 3.500 persons of Bosniak families in Portland. And according to data from 2014, in Vancouver there are around 169.500 citizens of which around 100 to 150 are Bosniak families or close to 750 persons. IBECO has almost 200 Bosniak families who are paying the annual membership fee.

It is unknown when the first Bosniaks came to Portland and Vancouver, although it is known that during the 1900s many Bosniaks had worked in mines and cutting woods of Montana, Washington, Idaho, and Oregon. One of those Bosniak pioneers is the deceased Sacir Ovcina, who moved to America in 1907, and died in Portland in 1951, and buried at the local Greenwood Hill cemetery. After the Serb-chetnik aggression on Bosnia and Herzegovina, a wave of Bosniak refugees – muhajirs is coming to Portland and Vancouver, who decide to settle down here, far away from their homeland. In this wave. The first group of Bosniak families arrives in early 1993.

As a consequence of the grown needs to organize the Bosniaks (to foster faith, culture, tradition, not only in children but in youth and adults), and the growing community of Bosniaks in Portland and Vancouver, the need for establishing an institution which would keep the Bosniaks from complete estrangement from our homeland Bosnia and Herzegovina, our faith, tradition and everything else that goes with it, as well as to find ways of how to keep children and the youth from total assimilation, from the one in negative sense, came up.

Furthermore, the Bosniak jamaat in Portland is one of the youngest (meanwhile older) jamaats founded in North America, as part of the Islamic community of Bosniaks of North America. Since the beginning of work the Executive (prior to the Managing) board of IBECO until now, there were moments when there had to be changes in the Executive board itself (EB), with the goal to find persons who are able to carry the load of the beginning of the work of the jamaat and organization and its further improvement. Since then until today a large number of our diligent and honourable persons has been member of the Executive board.

During the period since the official establishment of the IBECO jamaat and organization here were no significant activities. Mawlids and tawhids were held in the houses of our Bosniaks, Jumu’ahs were hold in Arabic masjids. This was the situation until 2003, when Jasmin Huskic moves to Portland and is engaged to voluntarily and part-time act as the Imam of IBECO. Thanks to his work and the activists of the EB and a smaller number of IBECO members facilities on Stark Street were rented where certain activities were performed such as maktab, Jumu’ahs, Eids and appropriate gatherings of Bosniak families. In 2009 an object with land is boughton on SE Foster Rd, which is renovated in order to continue certain activities. In 2011, the complete IBECO object is being renovated in order to provide better conditions for work and activities. On January 1st, 2013, IBECO employs the Imam full-time and his name is Abdulah ef. Polovina. The following year, in 2014, the IBECO jamaat and organization was the host of the 19th meeting of Bosniaks of North America within which, with the presence of a large number of Bosniak guests from all parts of North America and special guests from Bosnia and Herzegovina, the IBECO mosque and Bosniak center was opened.

The IBECO jamaat and organization is continuously active in joint actions and activities of ICNAB. It is one of the more active and accurate jamaats not only during the process of reorganization of our framework religious organization ICNAB, but continuously with everything that is going on at ICNAB level. The IBECO jamaat is an active member of ICNAB and pays its memebership fee and other material obligations and actions of ICNAB regularly, and actively participates in the work of the jamaat within the masjid 1 West.